Explore the Nature Trails of the Heard Wildlife Sanctuary

Escape the concrete of the city and hike over 6.5 miles of self-guided or interpreted nature trails that wind though the diverse habitats of our 289-acre wildlife sanctuary, including tall grass prairie, bottomland hardwood and limestone escarpment. Take advantage of the opportunity to encounter many species of birds, insects and animals. 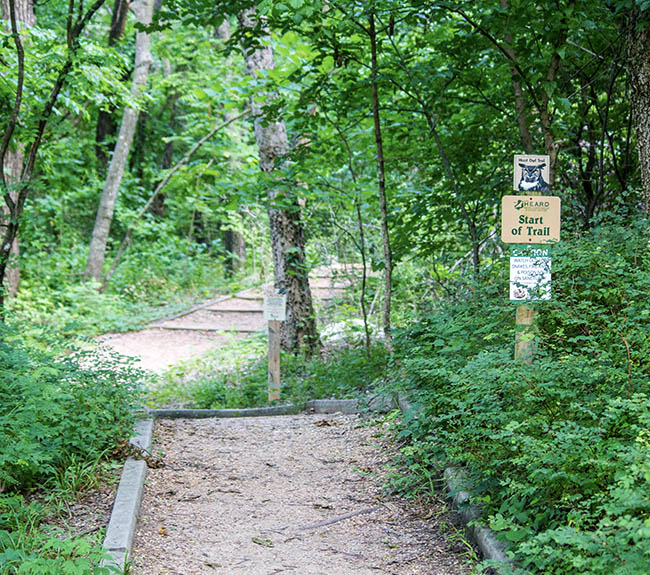 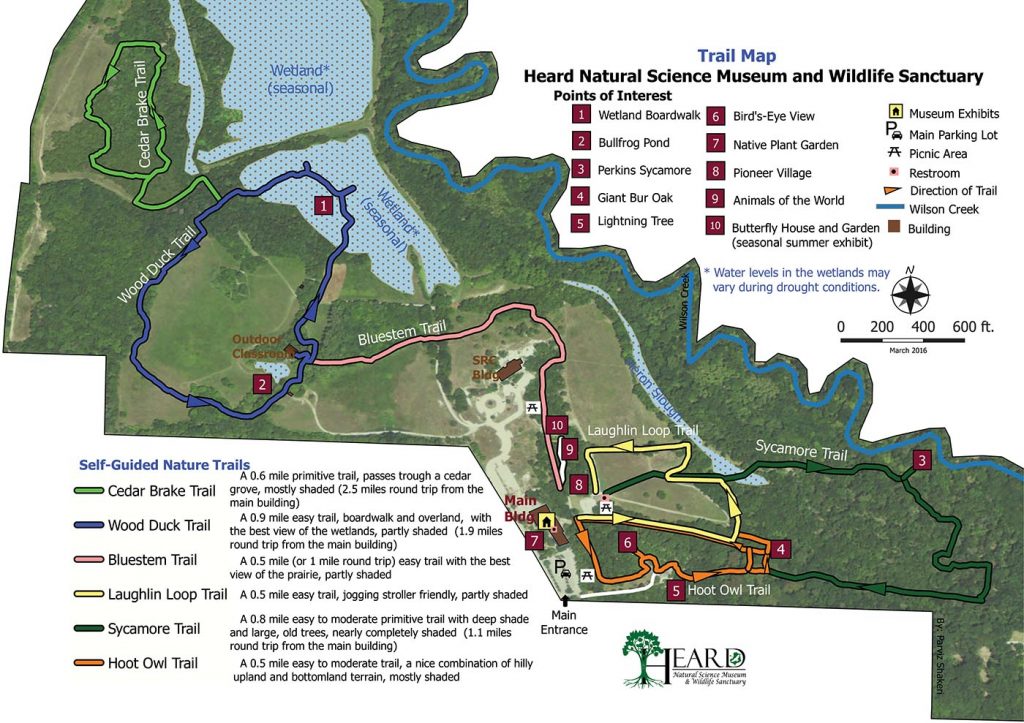 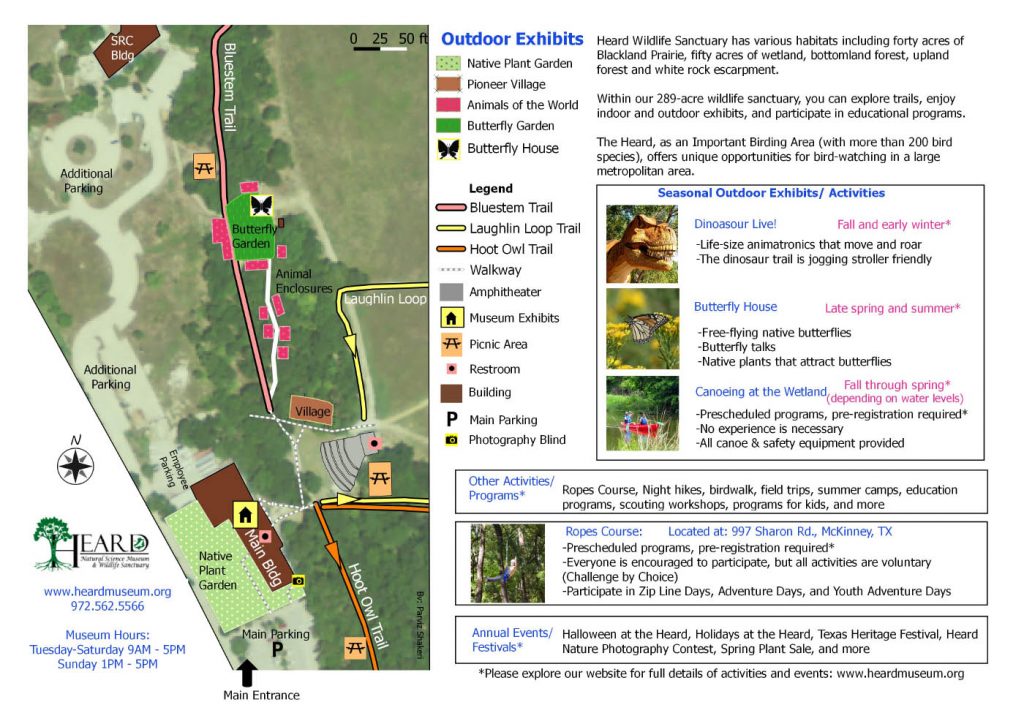 A nice combination of upland and bottomland terrain.

Wetlands boardwalk and overland trail with the best view of the wetlands.

This trail offers the best view of the Heard’s prairies.

Animals of the World Trail

Next to Animals of the World exhibit and Native Texas Butterfly House & Garden.

Here is a glimpse of seasonal sights along our trails.

Heard Natural Science Museum & Wildlife Sanctuary would like to remind you that there are risks associated with outdoor activities. Before you visit the Heard Wildlife Sanctuary and gardens, please become aware of and alert children to any risky areas or conditions that may be present in your surroundings. Please do not leave trails, and do not approach areas or conditions that may pose a risk to you or your family. You should also be aware of your family’s physical limitations and always take necessary safety precautions while exploring the outdoors.

Several species of flora and fauna that reside on the Heard Sanctuary can cause mild to severe physical pain or injury, including (but not limited to) copperhead snakes, fire ants, and poison ivy.

Copperheads can be recognized by their deep reddish brown cross bands that are about as wide dorsally as they are laterally. Their beautiful pattern and brown coloration provides excellent cover when coiled up or even slithering among the leaves. As with any animal, any provocation can result in retaliation. Even the simple gesture of grabbing a rake next to the near-invisible snake may seem threatening. Snakes are an important part of our ecosystem, so please be watchful and simply avoid them. Copperheads feed on mice, small birds, small snakes, insects, and amphibians, helping to keep the populations of these small animals in balance.

The Western cottonmouth, (also known as a water moccasin) prefers moist environments such as marshes, swamps, ponds, lakes, ditches, and canals. This stubby, muscular snake can grow to nearly six feet. When threatened, it will open its mouth to show its fangs. The inside of its mouth is white and reminded people of cotton, hence the name cottonmouth. They eat frogs, fish and small animals. Cottonmouths are sometimes confused with watersnakes. However, the cottonmouth does have distinct features including cat-like pupils and a pit on the side of the head between the eye and the nostril.

The highly aggressive nature of the imported fire ant, Solenopsis invicta, is a commonly recognized trait. A disturbed mound will result in several hundred worker ants swarming out and stinging vertical surfaces. If you are standing on a mound, this process may take only a few seconds, so it’s important to be aware of what kind of surface you are standing on. Fire ant mounds are characterized by “fluffy” soil, lacking a central entry, unlike most ant mounds.

Poison ivy, Toxicodendron radicans, is well known for its ability to cause a skin rash. The leaf shape is characterized by a division into three almond-shaped leaflets. Each group of three grows on its own stem, which connects directly to the main vine. The leaves of the poison ivy plant range from light to dark green. They may also range in color from red to yellow in the fall. This plant also does not possess thorns. There are a number of mnemonic rhymes, such as “Leaflets of three, let it be,” which can help you remember the characteristics of this plant.

Let’s get ready to explore!